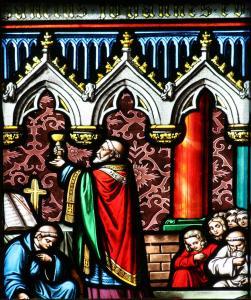 No other form of prayer can equal the Holy Sacrifice of the Mass. “At the Last Supper, on the night he was betrayed, our Savior instituted the Eucharistic Sacrifice of his Body and Blood. He did this in order to perpetuate the sacrifice of the cross throughout the centuries until he should come again, and so to entrust to his beloved spouse, the Church, a memorial of his death and resurrection: a sacrament of love, a sign of unity, a bond of charity, a paschal banquet in which Christ is consumed, the mind is filled with grace, and a pledge of future glory is given to us” (Sacrosanctum Concilium, 47). Christ died only once, but in the Mass, His Sacrifice is re-presented in an unbloody manner.

Let’s look at what some of the saints have said about the Holy Mass:

“Put all the good works in the world against one Holy Mass; they will be as a grain of sand beside a mountain” (St. John Vianney).

“The Mass is the most perfect form of prayer” (Pope St. Paul VI).

“The heavens open and multitudes of angels come to assist in the Holy Sacrifice of the Mass” (St. Gregory the Great).

“Jesus … [is] the Lamb that was slain but who lives forever, in every instant renewing his passion through the continual celebration of Masses throughout the world” (Bl. James Alberione).

“The celebration of Holy Mass is as valuable as the death of Jesus on the cross” (St. Thomas Aquinas).

“If we really understood the Mass, we would die of joy” (St. John Vianney).

To help you prepare for Holy Mass and to offer thanksgiving afterwards for the great gift of the Mass, here we provide Prayers before and after Mass, which were composed by St. Thomas Aquinas.