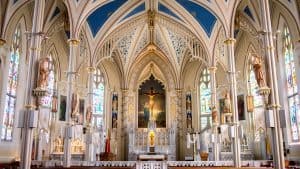 Anyone who attends Mass on Sundays and Holy Days of Obligation should be familiar with the Nicene Creed. (The Creed is also used on other Solemnities.)

“Whoever says ‘I believe’ says ‘I pledge myself to what we believe.’ Communion in faith needs a common language of faith, normative for all and uniting all in the same confession of faith,” says the Catechism of the Catholic Church (#185).

Of all the Catholic creeds, two have a special place in the Church’s life: the Apostles’ Creed and the Nicene Creed. The Nicene Creed (also called the Niceno-Constantinopolitan Creed) dates back to the 4th century. It was proclaimed at the Ecumenical Council of Nicaea in 325 and expanded by the Ecumenical Council of Constantinople in 381. (Church councils are “authorized gatherings of bishops for the purpose of discussing ecclesiastical problems with a view to passing decrees on matters under discussion [Fr. John Hardon].)

“…[T]he Nicene Creed was produced by the Council of Nicea I (325), which was convoked to combat the heresy of Arius, who basically denied the divinity of Christ. Here the Council wanted to teach very clearly that Jesus Christ is ‘consubstantial’ or ‘one in Being’ with the Father, sharing the same divine nature; that He is begotten, not made or created; and that Mary conceived by the power of the Holy Spirit, and through her, Jesus Christ, true God, became also true man. The original text of the Nicene Creed ended at the phrase, ‘And in the Holy Spirit.’ Without question, the basis for the Nicene Creed was the Apostles’ Creed and the profession of faith administered at baptism.

“Later, at the Council of Constantinople (381), the Church again not only affirmed its condemnation of Arianism but also condemned the Pneumatomachs (i.e. ‘the killers of the Spirit’). Therefore, the creed was expanded to clearly define the divinity of the Holy Spirit. Actually, the council adapted the creed written in 374 by St. Epiphanius of Salamis” (Fr. William Saunders).

Like the Apostles’ Creed, the Nicene Creed summarizes the central dogmas of the Faith. Both are similar, but the latter is more precise than the former. (Sometimes these creeds have been called the “short Creed” and the “long Creed”!)

Below is the current United States Mass translation of the Nicene Creed.

I believe in one God,
the Father almighty,
maker of heaven and earth,
of all things visible and invisible.
I believe in one Lord Jesus Christ,
the Only Begotten Son of God,
born of the Father before all ages.
God from God, Light from Light,
true God from true God,
begotten, not made, consubstantial with the Father;
through him all things were made.
For us men and for our salvation
he came down from heaven,
and by the Holy Spirit was incarnate of the Virgin Mary,
and became man.
For our sake he was crucified under Pontius Pilate,
he suffered death and was buried,
and rose again on the third day
in accordance with the Scriptures.
He ascended into heaven
and is seated at the right hand of the Father.
He will come again in glory
to judge the living and the dead
and his kingdom will have no end.
I believe in the Holy Spirit, the Lord, the giver of life,
who proceeds from the Father and the Son,
who with the Father and the Son is adored and glorified,
who has spoken through the prophets.
I believe in one, holy, catholic and apostolic Church.
I confess one Baptism for the forgiveness of sins
and I look forward to the resurrection of the dead
and the life of the world to come. Amen.