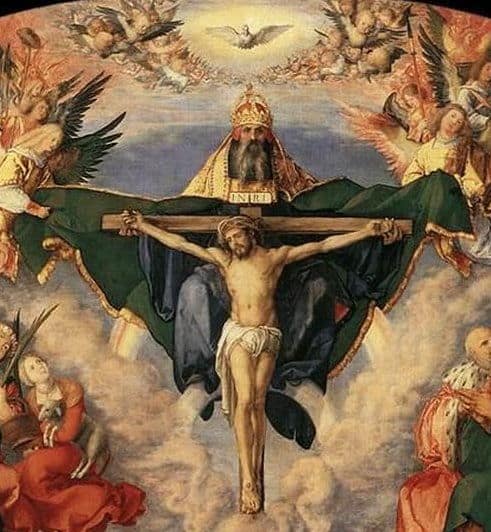 The Athanasian Creed is a “short, clear exposition of the doctrines of the Trinity and the Incarnation, with a passing reference to several other dogmas” (1912 Catholic Encyclopedia). It is one of the approved professions of the truths of our holy Faith, and it dates back to the 4th or 5th century. It is now thought that St. Athanasius is not the author, although the creed reflects his influence. This creed may have been written or revised by St. Ambrose.

Because of its first word in Latin, the Athanasian Creed is sometimes referred to as the “Quicumque.” This creed has a detailed explanation of the mystery of the Holy Trinity.

This is a supernatural mystery, meaning that it is a truth which we, with our limited human minds, cannot fully understand, but which we believe because we have God’s word for it (see reference from the Baltimore Catechism, quoted in our page on the Glory Be.)

“The mystery of the Most Holy Trinity is the central mystery of Christian faith and life. It is the mystery of God in himself. It is therefore the source of all the other mysteries of faith, the light that enlightens them. It is the most fundamental and essential teaching in the ‘hierarchy of the truths of faith.’ The whole history of salvation is identical with the history of the way and the means by which the one true God, Father, Son and Holy Spirit, reveals himself to men ‘and reconciles and unites with himself those who turn away from sin’” (Catechism of the Catholic Church, paragraph 234).

And the Catechism goes on to say (paragraph 237): “The Trinity is a mystery of faith in the strict sense, one of the ‘mysteries that are hidden in God, which can never be known unless they are revealed by God.’ To be sure, God has left traces of his Trinitarian being in his work of creation and in his Revelation throughout the Old Testament. But his inmost Being as Holy Trinity is a mystery that is inaccessible to reason alone or even to Israel’s faith before the Incarnation of God’s Son and the sending of the Holy Spirit.”

“The mission of the Holy Spirit, sent by the Father in the name of the Son (John 14:26) and by the Son ‘from the Father’ (John 15:26), reveals that, with them, the Spirit is one and the same God. ‘With the Father and the Son he is worshiped and glorified’ (Nicene Creed).

“By the grace of Baptism ‘in the name of the Father and of the Son and of the Holy Spirit,’ we are called to share in the life of the Blessed Trinity, here on earth in the obscurity of faith, and after death in eternal light (cf. Paul VI, Credo of the People of God  § 9).

“‘Now this is the Catholic faith: We worship one God in the Trinity and the Trinity in unity, without either confusing the persons or dividing the substance; for the person of the Father is one, the Son’s is another, the Holy Spirit’s another; but the Godhead of the Father, Son and Holy Spirit is one, their glory equal, their majesty coeternal’ (Athanasian Creed: DS 75; ND 16).

St. Elizabeth of the Trinity (1180-1906), a French Carmelite nun, wrote and prayed this Trinitarian prayer:

“O my God, Trinity whom I adore, help me forget myself entirely so to establish myself in You, unmovable and peaceful as if my soul were already in eternity.  May nothing be able to trouble my peace or make me leave You, O my unchanging God; but may each minute bring me more deeply into Your mystery! Grant my soul peace.  Make it Your heaven, Your beloved dwelling and the place of Your rest. May I never abandon You there, but may I be there, whole and entire, completely vigilant in my faith, entirely adoring, and wholly given over to Your creative action.”

Below we present an English translation of the beautiful profession of faith known as the Athanasian Creed.

Whoever wills to be in a state of salvation, before all things it is necessary that he hold the Catholic Faith, which except everyone shall have kept whole and undefiled without doubt he will perish eternally.

So the Father is God, the Son God, and the Holy Spirit God; and yet not three Gods but one God. So the Father is Lord, the Son Lord, and the Holy Spirit Lord; and yet not three Lords but one Lord. For like as we are compelled by Christian truth to acknowledge every Person by Himself to be both God and Lord, so are we forbidden by the Catholic religion to say there be three Gods or three Lords.

So that in all things, as is aforesaid, the Trinity in Unity and the Unity in Trinity is to be worshiped. He therefore who wills to be in a state of salvation, let him think thus of the Trinity.

Who although He be God and Man, yet He is not two but one Christ; one, however, not by conversion of the Godhead in the flesh, but by taking of the Manhood in God; one altogether not by confusion of substance but by unity of Person. For as the reasoning soul and flesh is one man, so God and Man is one Christ, Who suffered for our salvation, descended into hell, rose again from the dead, ascended into heaven, sits at the right hand of the Father, from whence He shall come to judge the living and the dead, at whose coming all men shall rise again with their bodies and shall give account for their own works. And they that have done good shall go into life eternal, and they who indeed have done evil into eternal fire.

This is the Catholic faith, which except a man shall have believed faithfully and firmly, he cannot be in a state of salvation.