A visit from the Black Madonna 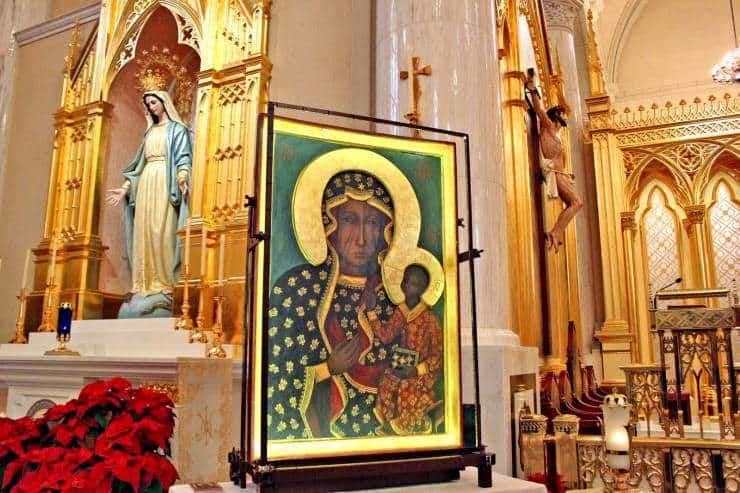 This past Thursday January 9th, 2014 we received with great delight the holy image of Our Lady of Czestochowa known as the Black Madonna. Brought by HLI President Father Shenan Boquet and VP for Missions Fr. Peter West the pilgrim icon is on a world tour of peace to help remind us of Christ’s faithfulness in times of great adversity as in this time where many wage war against the child and the family.

The Battler’s vision and the World’s reply
You shall restore me, O my last Ally
To vengeance and the glories of the hold
This is the faith that I have held and hold
And this is that in which I mean to die

–Hilaire Belloc, “Ballade to Our Lady of Czestochowa”

Zsolt Aradi in a beautiful overview describes the importance of this holy image of Our Lady.

“The history of the Polish national shrine of Czestochowa is a mirror of the tormented and troubled history of the nations of Central and Eastern Europe and a key to the understanding of their spiritual resistance during their present trials. According to the legend, St. Luke painted a portrait of the Blessed Virgin on the table made by Jesus Himself when He was an apprentice carpenter under the paternal guidance of St. Joseph. After the Crucifixion, this table was brought to Jerusalem; when the Holy City had fallen to the Romans the disciples kept it hidden during their wanderings. It was St. Helena, mother of Constantine the Great, who while searching for the Holy Cross found the picture of the Mother of Christ and took it to Constantinople. The venerated portrait of the Virgin thus remained from the third to the eighth century in Constantinople in a church built for the purpose of housing the precious relic. In the troublesome eighth century the picture was again in great danger and was carried to the wilderness to be hidden in remote places like the forests of Belsk, in Eastern Poland. Even in that part of Europe there was no real peace, because of the migrations from the East, which constantly moved westward. During the first Tartar invasion of Europe the picture escaped harm. In 1382 the Tartars occupied Belsk, murdering and looting, but the portrait of the Holy Virgin was not discovered by the heathen invader, for a mysterious cloud enveloped the chapel. After the Tartars returned to their Asiatic homeland the Prince of Belsk was ordered in a dream by an angel to take the picture to an insignificant, obscure village named Czestochowa. There it was confided to the custody of the monks of St. Paul of the Desert who have guarded it down to the present day.”

Fr. Mitch welcomes Fathers Shenan Boquet and Peter West of Human Life International to discuss the “From Ocean to Ocean Campaign in Defense of Life”, in which the Sacred Icon of Our Lady of Czestochowa, continues to tour the world.

“Comparative calm reigned around Czestochowa until 1430 and the renown of the miraculous picture grew. During this time King Jagiello united Poland and Lithuania and himself became an ardent Christian. He built a great Gothic cathedral around Our Lady’s chapel and kings, princes, noblemen and peasants provided the sanctuary with precious and priceless votive offerings. In 1430 a new danger appeared on the horizon as religious wars began to ravage this part of Europe. These were first the wars between the followers of Jan Hus and the Catholic princes. The Hussites attacked Czestochowa, murdered, burned, robbed and took the Holy Picture. There is a story that as they bore it away their horses stopped at the limits of the village and no beating could incite them to move forward. Thus the picture of the Virgin was saved. When the pious monks found the picture, retaken from the Hussites, it lay in the mud covered with earth and blood. They immediately wanted to clean it but found that all wells had gone dry in fighting the fire. It was at this time that a miraculous fountain sprung up, a spring that has since healed thousands and thousands of sick and has supplied water to millions of pilgrims.

The Polish nation attributes its very existence to the help of the Virgin of Czestochowa. The veneration of the picture of the Madonna is the expression of the Polish nation’s faith and gratitude. After the Hussite invasion the Poles fought for three hundred years with the Teutonic Crusaders, and all the decisive victories won by the Polish nation in these battles are attributed to the miraculous help of the Holy Virgin. Thus the safety of the shrine of Czestochowa is identified with the very safety and independence of the whole nation. During the wars with the Swedes in the seventeenth century Czestochowa was besieged by the whole Swedish army for more than six weeks, but the army of the enemy was defeated and the invader driven from Polish soil. Thus Czestochowa again defended Polish unity and independence. The following year, 1656, the Holy Virgin was acclaimed Queen of Poland and Czestochowa became the spiritual capital of the nation. But there was little peace around Czestochowa for warfare continued first against the Princes of the Reformation and then against the Turks who, having enslaved the whole Balkan Peninsula and the greater part of Hungary, had arrived at the very doors of Vienna. It was the last minute help of the Polish king Sobieski that saved Vienna and the West. Before Sobieski and his army undertook their crusade he and his knights gathered at Czestochowa and dedicated themselves to their Mother in Heaven.

After the partition of Poland between Austria, Prussia, and Russia the Polish people, although divided into three different states under foreign domination, remained undivided in their faithfulness to Mary, Queen of Poland. In every Polish church there was and there is still a reproduction of the Madonna of Czestochowa. When in 1919 Poland regained its independence the newly organized Soviet Russian Red Army immediately invaded the unified country and again the whole of Poland had recourse to its protectress. The Holy Eucharist was carried in procession in every city and every village, novenas were held to Our Lady of Czestochowa in each church. On September 14, 1920, the Russians stood at the Vistula and threatened Warsaw. According to the legend, on September 15th, the day of Our Lady of Sorrows, the Madonna appeared in the clouds above Warsaw. This day was the turning point in the war. In Polish history this victory is called “the Miracle at the Vistula.” During the Nazi invasion and subsequent occupation, people came only secretly to Czestochowa because Hitler prohibited the pilgrimages. The chapel was damaged during World War II but was later repaired and in 1945 half a million pilgrims came to express their gratitude for liberation from Nazism. On September 8, 1946, 1,500,000 persons participated at the National Shrine in the rededication of the entire nation to the Immaculate Heart of Mary. In 1947 an even greater crowd of faithful gathered to implore the aid of the Holy Virgin against a new danger: the increasingly violent Communist penetration. Although the Communists with the help of the Russian army overpowered Poland through force, violence and deceit, as they did Hungary, Czechoslovakia, Rumania and the other Central-East European countries, they could not overcome the spiritual resistance of the people. Old and young still cling to their faith and rely in absolute devotion on the ultimate help and intercession of the Virgin. The Bolsheviks are fully aware of this inner strength and resistance of the people, and the shrine of Czestochowa, like many another shrine of Our Lady in Central and Eastern Europe, has remained unharmed up to the present, although pilgrimages to it are for the most part prohibited.”