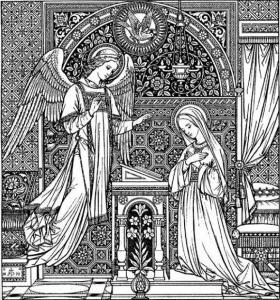 “…[A]lthough the repeated Hail Mary is addressed directly to Mary, it is to Jesus that the act of love is ultimately directed, with her and through her. The repetition is nourished by the desire to be conformed ever more completely to Christ, the true programme of the Christian life. Saint Paul expressed this project with words of fire: ‘For me to live is Christ and to die is gain’ (Phil. 1:21). And again: ‘It is no longer I that live, but Christ lives in me’ (Gal. 2:20). The Rosary helps us to be conformed ever more closely to Christ until we attain true holiness…” (#26).

“The ten ‘Hail Marys’: This is the most substantial element in the Rosary and also the one which makes it a Marian prayer par excellence. Yet when the Hail Mary is properly understood, we come to see clearly that its Marian character is not opposed to its Christological character, but that it actually emphasizes and increases it.

“The first part of the Hail Mary, drawn from the words spoken to Mary by the Angel Gabriel and by Saint Elizabeth, is a contemplation in adoration of the mystery accomplished in the Virgin of Nazareth. These words express, so to speak, the wonder of heaven and earth; they could be said to give us a glimpse of God’s own wonderment as he contemplates his “masterpiece” – the Incarnation of the Son in the womb of the Virgin Mary.

“If we recall how, in the Book of Genesis, God ‘saw all that he had made’ (Gen. 1:31), we can find here an echo of that ‘pathos with which God, at the dawn of creation, looked upon the work of his hands’ (John Paul II, Letter to Artists, 4 April 1999). The repetition of the Hail Mary in the Rosary gives us a share in God’s own wonder and pleasure: in jubilant amazement we acknowledge the greatest miracle of history. Mary’s prophecy here finds its fulfilment: “Henceforth all generations will call me blessed” (Lk. 1:48).

“The center of gravity in the Hail Mary, the hinge as it were which joins its two parts, is the name of Jesus…. When we repeat the name of Jesus – the only name given to us by which we may hope for salvation (cf. Acts 4:12) – in close association with the name of his Blessed Mother, almost as if it were done at her suggestion, we set out on a path of assimilation meant to help us enter more deeply into the life of Christ” (#33).

“From Mary’s uniquely privileged relationship with Christ, which makes her the Mother of God, Theotókos, derives the forcefulness of the appeal we make to her in the second half of the prayer, as we entrust to her maternal intercession our lives and the hour of our death.”

Let us join together in praying the Hail Mary, both as a prayer by itself and as part of the Rosary!