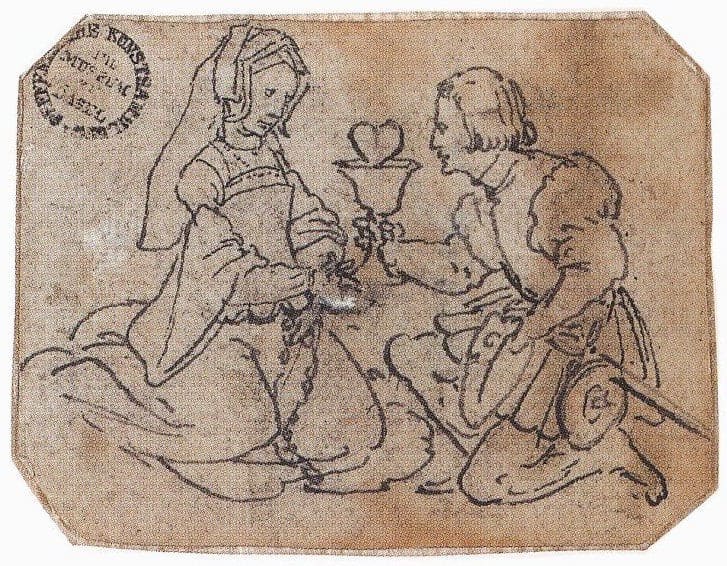 The renewal of baptismal promises strikes me as something as dramatic as anything you’d encounter in the most heroic parts of movies and novels. Picture the key scenes in Star Wars or Lord of the Rings – vows: vows imply that, despite great odds, my will is firmly committed to something.

“Do you renounce the lure of evil, so that sin may have no mastery over you?”

“Do you renounce Satan, the author and prince of sin?”

This rite, the renewal of baptismal promises that we make at Easter or at a baptism, takes but a moment or two. Some of us feel its power; likely some don’t. But I wonder if any of us really take it outside of the church with us – consciously, I mean. Do we recognize that we are a part of a kingdom, that we have been entrusted with a mission by the King, that we serve a damsel, the Church and Our Lady, and that enemies are pitted against us?

St. Paul says that “our struggle is not against flesh and blood, but against the rulers, against the authorities, against the powers of this dark world and against the spiritual forces of evil in the heavenly realms.” (Eph 6:12) That sounds pretty exciting, but what does it come down to? The days of the Coliseum where Christians had to stand up against lions and other fearsome creatures is long past; the days of the Medieval Christian knights, warriors who had vowed to protect defenseless pilgrim to the Holy Places, has long past too, right? Christianity is synonymous with conformity, boredom and your Sunday best. Nothing more.

Nothing more. At least that’s how it can appear on the outside. I thought so too when I was young and on the ‘outside looking in.’ (I’m a convert.) As a society we have completely lost any regard for what St. Paul is speaking about in the passage from Ephesians quoted above. We don’t know what an interior battle is. Even movies that talk about this kind of thing inevitably turn interior battles into exterior ones, by bringing in swords and all of that exterior stuff in the fight against demons. Demons, theologians tell us, like angels, are immaterial beings – how are swords supposed to work on them? Hollywood doesn’t know how to depict an interior struggle. A few great novelists have been able to do this; not many, but some.

The interior struggle, though, is all that matters. Faith, hope and charity; prudence, justice, fortitude and temperance. These are the hallmarks of the Christian, and not only that, of real men. It’s a lesson long lost to us. The latter group of virtues—prudence, justice, etc.—are called the cardinal virtues. They were identified by the Ancient Philosopher, Plato, as the whole point of the philosophic life. Christians and the pagans of the Ancient World agreed that the point of life is reforming the interior, not the exterior. Today we are obsessed with the exterior and yet, as it is easy to see, politicians have come no closer to making the world any better. In fact, all signs point to the opposite. Why? Because the only way to make the world better is to make yourself better.

It’s not flashy, but anything, absolutely anything, that interferes with this, distracts from it, delays it, is your enemy, in fact, your only enemy. St. Augustine wrote,

It is against this wrongdoer [the devil] and bully that we sing Lord, deliver me from the hand of the wrongdoer and the bully. (Ps 71:4) Don’t sing it against your neighbour, who tells stories about you… against the mugger ready to murder you. These are all human beings, lying in wait for you. They are flesh and blood, they pass away.”

How does the devil attack? Through those things that oppose faith, hope and charity, prudence, justice, fortitude and temperance: namely, doubt, despair, hate, imprudence, partiality, cowardliness, and self-indulgence. This is where we fight to renounce Satan and do something truly heroic.

People grow up simply assuming that adult society knows what it is doing. A part of the maturation process lies in realizing that people and wisdom don’t always go hand-in-hand. In fact, sometimes they are very far apart. Because of this, it is sometimes that case that very obvious things are missed. Are they missed or are they consciously rejected for some reason? Politics, the complex working out of ‘adult problems,’ has missed the most obvious thing: there is no peace, no good, and no prosperity without virtue. Laws and regulations take the place of virtue: principally, the virtue of self-restraint. Since people cannot retrain their sexual impulses, we must have a whole series of accommodations, some of them most barbaric, like the legalization of abortion, to ‘make right’ our departures from virtue. Divorce is another great example of this. We cannot insist that people restrain their impulses, and therefore we accommodate and vainly try to make right the damage divorce does. Children suffer, abandoned spouses suffer, and the economy suffers, because as a society we cannot insist that people do the right thing.

It is true that St. Thomas Aquinas taught that society cannot legislate virtue. We cannot punish all departures from virtue, such as when a person doesn’t go to mass or when a person has impure thoughts or when a person fails to pray for this enemy. He was right to teach this. Laws do not make a person good. Nothing makes a person good but his own will and the grace of God. Asking the law to make someone good is like asking an apple to make a person round and red. Laws should punish huge departures from virtue – like murder, and theft, but that it does so goes very little distance toward making someone virtuous.

We have something today called ‘sensitivity training.’ It’s a new thing in the workplace. I have a relative who coached basketball at a high school. He has a simple rule: if you don’t come to practice, you don’t play in the game. What an excellent rule. It balances rights with responsibilities for sake of the common good, in this case the good of the team. So, when he imposed the rule, the end result was that he was sent to ‘sensitivity training.’ Yes, it was a ludicrous miscarry of justice. But, even if it was not, would this training do what it was aimed at doing – make my relative sensitive? It would if he wanted it to. If he didn’t want it to, it would not. You cannot impose virtue – even sham virtues, as in this example. The only force that can make you good is your will acceding to the promptings of the grace of God.

Usually, virtue is acquire through hard work, not through a weekend course, or through reading a bestselling self-help book. God doesn’t usually make it easy. But one of the ways in which He helps us to assent to His grace is through setting up these things we call ‘vocations.’

Virtue is, as I have said, the only thing that matters. It’s all that is asked of you as a human being. Because it is so great, so important, so difficult, it requires a life of work – probably sixty years or thereabouts. For this reason I am looking forward to turning sixty. I still have a ways to go, though, a lot of heavy-lifting left to do. By sixty, God willing, I will have been married for just over 35 years, a parent for just about the same length of time. The number of occasions that will have occurred by then calling for patience, forgiveness and the sacrifice of my time and energy, will be so numerous that I think that I would have to have been really firmly set against God’s will if I am not a saint by then. After all, that is what marriage, in my case, and, for others, religious life, are set up to do: make saints out of stubborn, selfish, lazy, and unimaginative people.

Thank God for vocations! Where else would I have had the chance to heal the sick (in the middle of the night), bear unjust judgments with love and forgiveness, work without thanks, wash and clean things that I didn’t dirty, pray for others sorely in need of my prayers, encourage others when I feel that I need encouragement, do things that I don’t want to do and go places that I don’t want to go, just because my loved ones want to? Where else would this ever occur? The single-person must seek out opportunities for these kinds of things. The married person does not. I will become a saint despite myself, just because in a vocation it is ‘sink or swim’ – there is no opportunity for remaining where you are. And isn’t that what we do by nature: stay in our comfort zones?

Politics will not make you a good person. Implementing just laws and living in a country that has just laws will not do this. Laws do not draw things out of your heart. Laws force, love alone urges. Love is doing because you want to; law is doing because you have to. You can follow a law unwillingly. Love is only followed by choice. “The family,” said St. John Paul II, “is the first school of the social virtues needed by all peoples.”

God will not judge me on anything outside of what I have done in and for my family, nor the religious outside of his or her order. Satan is crushed there.