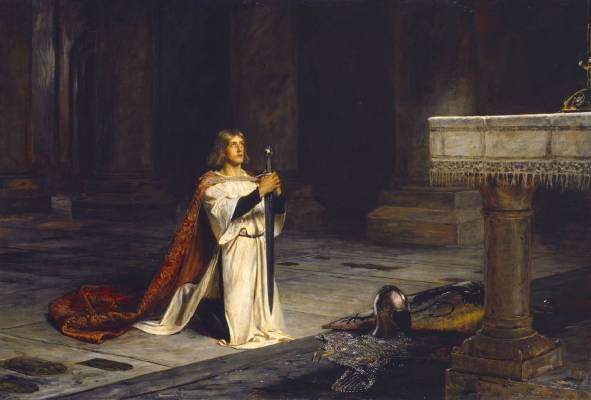 In olden times, there lived in a certain part of England a rich and powerful knight, who kept a great estate and lived royally. But he forgot God, and thought people fools who confessed their sins to a priest. But he had a friend who grieved to see him in this state. One Good Friday this friend met him, and said: “How can you bear to go about with this load of sins unconfessed? Let us, in honor of this great day, when Our Lord died to save us from our sins, go to that good hermit nearby, for he will give you wise counsel which you sorely need.”

The knight’s heart was touched by divine grace, and he agreed to go to the hermit. The holy man said: “There shall be joy in Heaven over one sinner that doth penance, more than over ninety-nine just who need not penance.” The knight then spoke long to him of his sins, for there was indeed much to be told, and the hermit, who was an expert in the cleansing of souls, knew well how to search and question him, so that he was presently acquainted with the whole of the matter. Then he said to the knight: “Dear brother, rejoice, God will forgive you all your sins, and give you His grace, which will soon be yours, because of the holy penance you will now do.” But the knight much disliked the idea of penance, for he wanted to have the grace of God for nothing, like so many of us. He replied: “Alas! my father, I am not one for penance. I was brought up softly, and only like to eat nice things. Give me the easiest penance that is to be had, or I will fall back into my sins.” “Do not fear, my brother,” said the hermit. “You will have such an easy one, that no one could refuse it.” “Oh, God be praised!” said the knight. “I ask no better.” “Take this small flask,” said the hermit. “Go down to the stream there, and fill it with water to the brim. Then bring it back to me, and I will give you absolution from all your sins.” “With pleasure,” said the knight.

He ran forthwith to the stream and seated himself on the bank. But the water that was flowing so swiftly, turned aside when it came near him, and flowed by, leaving the flask empty. He tried another stream, but all to no purpose. It was the same all that day, wherever he went, and he began to wonder what it was that prevented him from filling the flask. But suddenly it dawned upon him that the pure water fled from him who was so deeply sunk in sins, and so he could not do his penance. This brought home to him the evil state he was in, and being loyal and truehearted, he resolved not to return to the hermit till his penance was done.

Leaving his wife and estate, he set off through the world, and wherever he came to a spring, he dipped the flask into it, but he could never fill it. He wandered about thus for two years, in the heat and cold and dust and rain, weary and sad, his clothes in rags, and his boots full of holes, suffering much, but bearing all most patiently.

One day, being overwhelmed with sadness, he bethought himself of Mary, the Consolation of the Afflicted, and cried out to her: “Alas, dear Lady, how badly have I treated thy Son, that He thus turns away from me. Most glorious Virgin, wilt thou not pray for me? I deserve indeed my sufferings, no man knoweth this better than I, but, gentle Lady, have pity on me.” When Our Lady heard this prayer, she put it into his heart to return and tell the hermit, and confess his failure.

He was so worn and thin and weary that the hermit did not recognize him, but he gave him a kind welcome, as he did to all pilgrims. But when he discovered who the knight was, he wept and gave thanks to God, and said: “My friend, you have gained great merit by your sufferings. God has forgiven you all your sins, because you were faithful in obedience. Now you may leave me that flask, and I will give you another penance.” But the knight’s heart had been changed by grace, and he humbly answered: “Nay, my father, it is not right to leave off a quest begun. I will set out again when you have given me more good counsel.” Then the hermit comforted him, and both the hermit and pilgrim wept the one in compassion and the other in contrition for his sins. And as he wept, one of the pilgrim’s tears fell into the flask which he still carried round his neck, and lo! In a minute it was filled to the brim, and he knew that his penance was done, and that God had forgiven him all his sins. Then the holy man absolved him, and said: “Go back in peace to your wife and your estate, for to the tear of your penance Our Lord hath added the ocean of His love.”

Thus will Our Lady help all who have recourse to her to deliver them from their sins.