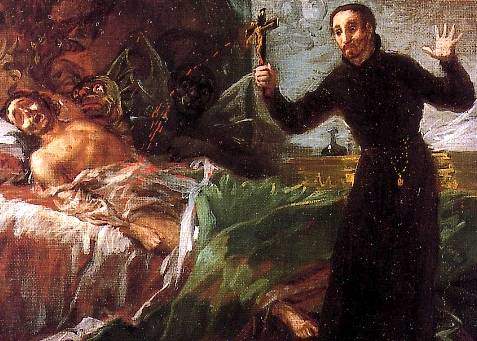 Today, October 10th, we remember a lesser known saint who bears both a famous given name, that of St. Francis of Assisi and a rather infamous family name, Borgia. Reading an outline of St. Francis Borgia’s life on the Catholic Fire Blog I was struck by the name and the painting of Francis exorcising a poor soul. Then it occurred to me. Where there is a sinner there is always a saint nearby to extend and offer us Christ’s salvific grace. Where there is sin God’s unfolding yes, a pure forgiving caritas, is also there offered freely and never forced. It is God’s little signature.

More about this great saint…

St. Francis Borgia was born October 28, 1510, at Gandia, Valencia, Spain, the first of 17 children, to noble parents. He was the son of the Duke of Gandia, the great grandson of Pope Alexander VI, the notorious Borgia pope, and the grandson of King Ferdinand of Aragon. He was named after St. Francis of Assisi.

Following the death of his mother at the age of ten he was educated by his uncle, the Archbishop of Saragossa. Because he posessed many natural gifts he became a favorite at the court of Charles V.

In 1539, St. Francis Borgia was appointed Viceroy of Catalonia, and four years later, on his father’s death, the Duke of Gandia. He built a university there, received the degree of Doctor in theology. After his wife died in 1546, Francis entered the Society of Jesus in 1548, having made provision for his eight children.Two years later he left Gandia, never to return, and joined the Jesuits in Rome. He immediately set about initiating grand projects – he founded colleges, monasteries, and charitable institutions Then, he left for Spain where his powerful preaching and example sparked a renewal of religious fervor in the country.

In 1556 he was placed in charge of all the missions of the Society and his energetic work transformed them. He also started missions to Peru, New Spain and Brazil. He was elected the general of the Jesuits on July 2, 1565, and, although in poor health for his last years, he worked tirelessly and introduced so many reforms to the society of Jesus that he was considered its “second founder.” Francis was a man of both contemplation and action, drawing much strength from the time he spent in silence with the Lord.