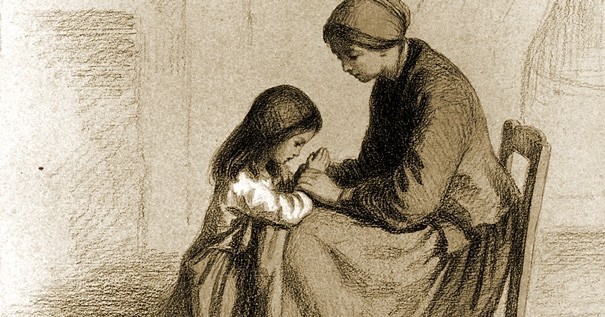 Lots of people worry about lots of things. Their worries aren’t necessarily mine, and vice versa. The thing I worry about most is probably not money, although that is a big one. It is my kids, and what I am or am not doing right for them. If I ever lay in my bed at night worrying, invariably it’s about them.

Of course, objectively speaking, we ought not to worry about anything – but who is immune from worry, perhaps only the saints among us? But of things we should be concerned about, salvation should be the number one; my own salvation most of all because that is what I have the most control over. The salvation of my wife and children would rank a close second. It’s hard to imagine the first happening without the others happening too. After all, my primary responsibility in life is to my family.

But if we have to worry, we might as well worry about things that matter, rather than things that don’t – like fashion, success, preferment, our appearance…

When I worry about my kids, what is it I am worrying about? I love them, so I want them to be happy. But I don’t have a narrow view of happiness, and so when I think of them being happy, I don’t think of the here-and-now – at least not primarily. I think about them growing closer to God, getting close to Him so that they will feel His loving presence, and come to rely on Him in times of trouble; I also think about them developing those virtues that will lead them to make the right decisions and avoid painful mistakes and awful sins.

I have a feeling that many parents waste their time with their kids doing things that won’t pay off for their happiness, at least as much as they think they will. Put it this way, the kid who is taken from hockey to piano to swimming to math tutoring is being prepared in some important ways. Sports are good for the body and mind – we are too sedentary today, and that not only leads to increased rates of obesity, but even worse, to depression and all sorts of mental problems. Music is good too: for the mind and the spirit. Math is good too: for the mind, and for future employment. But you know what is also good, which has been left out of this portrait of a very busy young life? – time at home with the family, getting to know life as it was meant to be. Also, time at church: at Mass, in adoration, etc. Will your children come to identify more with the local hockey team or the local church? Will they be closer to their parents and siblings or to their friends?

There are some cases of kids being too churched. So, take all the extra-curricular activities listed above and wipe them all away. Unless your child is going to be a hermit or a contemplative in a monastic community—and you have no idea what another person’s vocation is—this hardly constitutes a well-rounded upbringing. Parents who do this are like those who never feed their kids any kind of fat, salt and/or gluten. You know, people—children—have died as a result of such diets. And, spirits die as a result of church mixed with nothing else. Just because obesity is the greater affliction in North American society does not mean that there is no such thing as being too skinny; so, just because children are more often under-spiritually-nourished does not mean that over-doing it is not a problem too. “But my child loves it,” I have heard parents whose children may be in this situation say. Likely, they love it because they love their parents and they want to please them. That does not mean that malformation cannot result.

We should take a clue from John Paul II’s Pastores Dabo Vobis, his letter on priestly formation. In that he talks about human formation as being four-fold: it involves what he calls human formation, spiritual formation, intellectual formation and pastoral formation. All four of these pertain to everyone, albeit in different ways. All four are important, but in the context of over-doing number two – spiritual formation, I think parents need to read what he says about human formation. You know what, it also pertains to kids who fit into the description the above-paragraph: the too-busy kid. Just because you are around people all the time does not mean that you are being properly socialized, for instance. In fact, sometimes just the reverse is true, and what results is what I call the “Lord of the Flies” effect, where kids are raising kids, on the playground, on the hockey rink, at the swimming pool – with dire consequences!

Read Pastores Dabo Vobis. It will get you thinking – although there are lots of other good books to read too.

So back to my actual worrisome situation. I have six children, ranging from 13 years to 2 months; two boys, four girls. Even now, with my oldest child just entering the world of adolescence, our life is full of worrisome decisions that we know are going to impact them for the rest of their lives. We haven’t even gotten to the point where we have to deal with driving, dating, drinking, employment, and all that yet.

I got together with a couple of friends who are a few years older than me the other night. One tells me his oldest daughter has moved in with her boyfriend. The other father wonders if his daughter goes to mass at all when she is away at school. It’d be really easy—and naïve—to believe that I will do a better job with my kids, so that they won’t turn out that way. But these are good men I am speaking about, and I am sure they parented very well. Another friend of mine has had (so far, anyway) just one of his children out of eight co-habit. His other children seem to take their faith quite seriously. Sure, it’s as much about the child as it is their parents. But, as parents, how can we maximize the odds that our kids will chose to live rightly?

From my vantage point, which isn’t a high and great one, it seems to me that two things are essential for raising your kids as good Catholics:

1)      Think with their mind: what are their spiritual needs, how do they interpret spiritual events, like mass, family prayer, controversial matters, discipline?

2)      Do not say one thing about priorities and do another. If you are saying their relationship with God is the most important thing in their life, do not put other things—like grades and other accomplishments—on a higher pedestal with your praise and criticism. Sometimes stop everything practical for sake of doing something spiritual – that, I think, will make a lasting impression on them. For example, take them out of school some day to visit a shrine, to have a day of prayer, or simply to visit a few different churches.


Colin wrote this article for the Knights of the Holy Eucharist. He has been married to Anne-Marie since 1999, and they are proud to raise their six children, in a small town in Ontario, Canada. Colin has a PhD in Theology and works tirelessly to promote the Gospel. “Just share the Word,” is what he believes the Lord says to him – and so he does. He recently founded The Catholic Review of Books, a printed journal and website dedicated to “all things books” from the perspectives of faithful Catholics. He is fascinated by the concept of chivalry as it applies to being a man and a father in today’s crazy world.