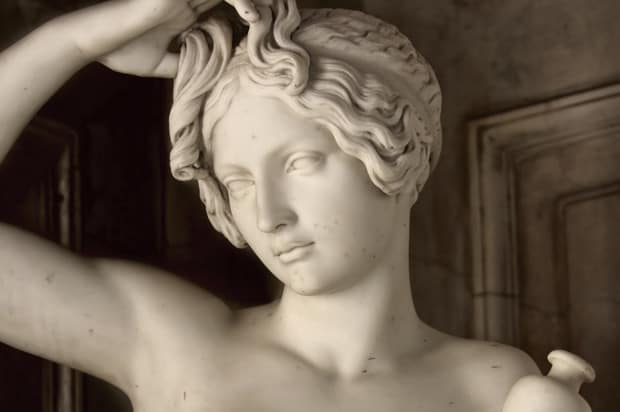 Aesthetics, the theory of beauty, is becoming a big topic for theologians. Of the so-called transcendentals – truth, goodness, and beauty – it has, of the three, been as neglected as the Holy Spirit is said to be the neglected Person in the Blessed Trinity. There are reasons for this. In part, this is because it is the late-comer to the group,  which had more often been enumerated the one, the true and the good. But that might not be the only reason, after all, it was reintroduced to Catholic theology as far back as the 13th Century by St. Bonaventure. Why the lack of interest in beauty? Perhaps it’s because it is a less ethereal concept than goodness, oneness or truth. Philosophers are much more comfortable with things ethereal. Whatever the case, it certainly sets off a whole lot of intellectual work.

Beauty has never had an easy place in Christian history. It has had its defenders but also many enemies. A puritanical stream endemic to Christianity rears its ugly head every now and then against beauty.

But as with most trends that come back to revisit Christianity periodically over the centuries, something about it rings true. What is the gram of truth behind the critique of beauty? Of course, it is the danger that a disproportionate regard for it brings. Is it easier to love beauty more than goodness and truth?

I cannot totally agree with this. But let’s look at a few of the reasons why beauty has disturbed Christians over the years. The great, but zealous and puritanical early Christian thinker, Tertullian, worried about the effects that ‘women being women’ has on the Christian community. He wrote against things like make-up and all that. Complicated issues were not complicated to Tertullian. He thought in black-and-white terms. But the kind of thought that has little sympathy for visual beauty is the kind that is naturally at home with extreme forms of asceticism (self-discipline) and sometimes even dualism. Tertullian was not guilty of the latter, and, even if you cannot agree with the lengths he was prepared to go, his thought does reveal something of the very serious link between vanity, lust and beauty.

It is a fact that because of the very strong influence Platonism had on Early Christianity the material could be easily construed as the enemy of the spiritual. One did not have to look too far to see the ill effects of beauty on the serious life. If there was one thing that many Ancient philosophers and saints knew it was that beauty was the enemy of reason…

Another very serious episode in the history of the Christian understanding of beauty occurred in the 8th and 9th centuries, in terms of so-called Iconoclastic Controversies. Literally, an iconoclast is someone who smashes icons. This was a movement in the Eastern Church that said that divine things cannot, and therefore, should not, be represented by art. Luckily the truth was victorious and the crisis resulted in an enriched understanding of the divine beauty in nature, especially in human nature.

Perhaps the final (or perhaps not, final) serious attack on a Christian aesthetic came with the Protestant Reformation.  The Reformation constituted a very widespread and unfortunate attack against the place of physical beauty in Christian worship. While Protestants outfitted their houses with beautiful art and décor, very often they smashed anything that might catch the eye in a church – from ornate alters, to statuary, icons, and stain glass windows. For some, the ideal was a church of plain white-washed walls, with nothing in it save a Bible.

The years following Vatican II also saw some intermittent fits of iconoclasm. There was something far too Protestant in the understanding of many people at that time, and, judging from the brief history lesson above, not much of a sense of the Catholic tradition.

So what should be our position on beauty? Why is this even worth talking about?

Beauty is not primarily a temptation to lust, which danger was Tertullian’s focus. Primarily, beauty is a gift from God, a delight to our senses. It is a gift in and of itself. More, importantly, considering original sin, beauty is a very basic means by which God reminds us of His presence, thus giving us a chance at salvation.

A biologist would define pleasure as the means which assures complex organisms of doing things which are to their advantage, for instance, those foods which smell and taste good to them are the ones that they should be eating. To the theologian, pleasure is one of the gifts that God had in mind when He decided to make man as a creature with a body, rather than as a purely spiritual being like an angel. In other words, God wanted to make man with a body because He wanted to share bodily delights with him, the delights of sensory beauty, especially of the eyes and ears, yet also of touch, smell and taste. Aquinas liked to say that God created all manner of beings, because that was a more excellent way to express His infinite being – a being which could not be limited to any finite number of manifestations. In other words, more variety is better because each unique type of thing can say something about God that no other thing can quite say about Him. And we share His mind, don’t we? We love variety and complexity in things. Do we not love to look upon the complexity of the waves and eddies in the ocean, the stars in the sky; and in creations of man, the complex interplay of colors and shapes in a Rembrandt? Yet, paradoxically, we also enjoy the ‘unifiers’ that are pattern, theme? This is also of God because He is Himself utter simplicity and unity as much as He is infinite and unbounded. The world has variety in it because God is infinite; it was pattern and order because He is pure unity and oneness.

The beauty of appearance, word, thought and sound draw us to God, but these things also draw us to each other. The point of beauty is love of God and neighbor. It is not that the beauty of a woman who is not my wife is beauty any the less, but for me to appreciate it beyond what causes me to will her good and pray for her is beauty abused.

Blindness and deafness – these things are hardships. But even they can be used for the good, if in the absence of one faculty man employs the others to more strongly concentrate his attention on God. The blindness that afflicted St. Francis towards the end of his life was, truly that, an affliction, and yet we know he used to it concentrate his mind ever more attentively upon God. He was never one to forget the gift of nature, especially its beauty. It was fitting, in a strange way, that one of the final sacrifices God asked of him was his sight, the means by which he had so regularly seen God everywhere and which inspired him to praise Him.

We need to keep thinking about beauty in God’s providence – why He has made the world such as He has, and the fact that He has meant it as a gift for our salvation and as a token of His love. We need to think about what it is He is saying about Himself through it. Also, of course, we have to see how the abuse of beauty through lust and a million forms of idolatry ultimately undermine this gift intended for our salvation.

My five-year-old recently asked me why Jesus likes mosquitoes. After all, He created them. He was right to ask this. Although it seems puerile at first glance, the question is actually worth of our attention. I can only hazard a guess about why Jesus likes mosquitoes, and that is because I have not meditated enough upon God’s gifts. The next time you find yourself out somewhere and you have forgotten your Bible and your rosary, just look out on whatever it is that is in front of you. It is a book.