The Proper Role of Eucharistic Ministers 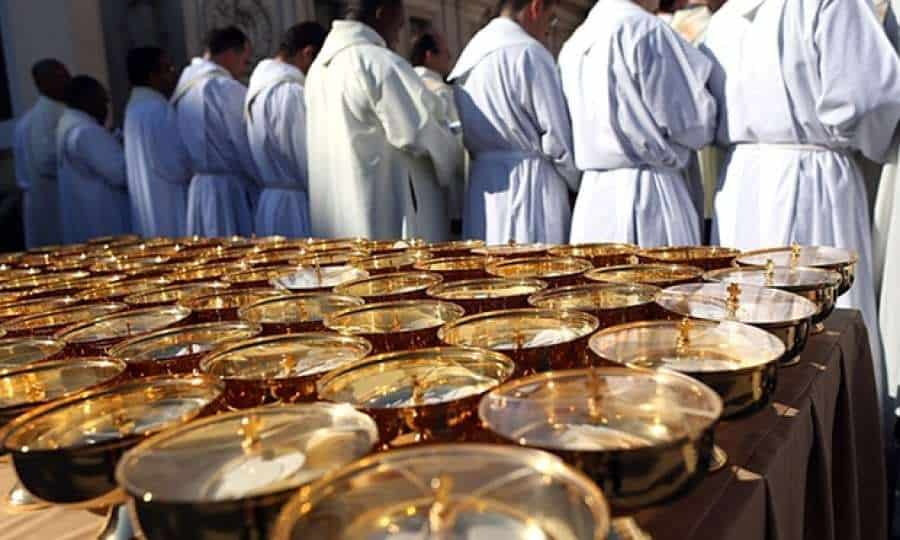 Every three years as the Church is reading the Gospel of Mark, during the dog days of summer it stops for five weeks and turns instead to the Gospel of John for instruction on the Eucharist.

Earlier this year, I wrote an article in these pages about the ongoing abuse of extraordinary ministers of Holy Communion, a phenomenon that has become de facto established in the Church in the United States, clear norms of the Holy See notwithstanding. I have long maintained that this phenomenon feeds the vocation crisis by dissociating priesthood from Communion. I also began to argue in that earlier piece that the ongoing abuse of extraordinary ministers engrains the functionalist and utilitarian mindset at the expense of symbolism. The functionalist/utilitarian mindset is so corrosive to modern mentality especially, e.g., in sexual ethics. In the present case, it reduces the symbolic act of the pastor who is “feeding my sheep” to a pragmatic act of “let’s get this done so as not to ‘unduly prolong’ Mass.” No wonder, then, that parenthood is also being progressively parceled up into generative, gestational, and upbringing “functions.” Priests, by neglecting the symbolic role of their spiritual paternity in feeding their people, do something analogous.

That earlier article elicited an outpouring of comments and, somewhat unusual for Crisis, a somewhat edged controversy. That’s why, in the midst of this late summer Johannine excursus, I return to the topic, convinced the Gospels provide us some possible perspectives on the question.

Jesus’s feeding the crowd with five loaves and two fishes is called a “miracle” in the Synoptic Gospels (Matthew, Mark, Luke). John, however, has no “miracles.” The Fourth Gospel is instead constructed around “signs,” which point beyond themselves to the One signified. Thus, Jesus multiplies the loaves because “I am the Bread of Life.” He heals the blind man because “I am the Light of the World.” He raises Lazarus because “I am the Way, the Truth, and the Life.” And he almost faces stoning from the Jews for his response, “Before Abraham was, I AM.” Of course, all of this is a clear allusion to God’s revelation of himself to Moses at the Burning Bush (Ex 3:14), the making of the old covenant.

Jesus’ acts in John are symbols. They are intended to contain what they point to while still pointing beyond themselves. They do something (e.g., feed the people) but they also point beyond themselves (e.g., to him who feeds and makes that feeding possible, as well as to foretell God’s future plan of institution of the Eucharist).

I note this efficacy aspect of Jesus’ work because I have heard, even in Catholic circles efforts to rationalize the sign. It’s not that the boy’s five barley loaves and two fishes fed the crowd. It was the “love and concern” that Jesus displayed which “opened up” the crowd’s hearts (and, apparently, their picnic baskets) to share their feed to meet the needs of all. Obviously, such a reductionist interpretation is foreign to the text and its generally received Catholic understanding. I cite it for two reasons: (1) to recover what John is trying to say and (2) to show the strong (and corruptive) strain of reductionist rationalism in some Germanic Catholic circles, especially in advance of the October Synod. Jesus’s priestly action feeds the people, not the people who are otherwise self-sufficient but only need a catalyst. The “sign” is that Christ feeds the people.

If the sign is that “Christ feeds the people” then so, too, should the alter Christus, the priest acting here and now in persona Christi, make Christ and His Saving act present to feed the people.

One might say that the Gospel presents Jesus blessing and breaking the bread, which the contemporary alter Christus does by offering the elements and consecrating the Eucharist. But John goes further. Jesus tells the apostles to get the crowd ready (“have them sit down”). He asks them to feed the crowd. He distributes the loaves and fishes, the gifts offered to Christ not directly by their little owner but through the mediation of Andrew the Apostle (“there is a boy here with five barley loaves…”). And, when the food is consumed, Jesus designates his Apostles as the clean-up crew, gathering the leftovers “so that nothing is wasted” into twelve hampers, a very apostolic number.

For John, the sign of the multiplication of the loaves is a profound symbol. It is not a social welfare or logistical problem, to be functionally met in merely pedestrian ways. It is not a technocratic problem, e.g., if only the Apostles had each put in 16.667 days of work to collect those 200 days wages! Jesus does not ask his Apostles (or, even less, the community-at-large) to tackle a supply chain problem efficiently. He asks them to do what he does: “feed my sheep.”

I suggest this sign has something to say to use about the banal use of extraordinary ministers of Holy Communion. For one, it asks us to reflect on what we are doing: addressing a spiritual need of encounter by a functionalist mentality. (“How to buy food for such a crowd! How not ‘unduly to prolong’ the distribution of Communion!) It also reminds us that in that unitary spiritual encounter with a High Priest (and his priests), the priest has a key role that should not be substituted, diluted, or delegated, just as the Priest and his priests had a key role in the blessing and distribution on a grassy hill two thousand years ago in Israel.

Vatican II encouraged us to return to Scripture. Scripture is not just a dry exegesis of verbs as they were defined millennia ago: there has always been a tradition of searching for “spiritual sense” in the Word. Scripture perhaps has something to tell us.