The feast of a saint knight! 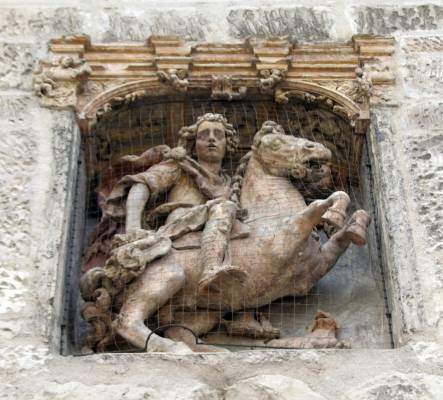 July 27 is the feast of a great saint and knight – St. Theoblad, or Thibaut, of Marly.

Born at Marly Castle, Montmorency, France; died December 8, 1247. Saint Theobald, son of Bouchard of Montmorency, was trained to take up the profession of arms, although he had always displayed an inclination to a life of prayer. Nevertheless, he was a distinguished knight at the court of King Philip Augustus II, even while he resorted frequently to the convent church of Port-Royal.

He abandoned his worldly goods in order to enter the Cistercian monastery of Vaux-de-Cernay in 1220. He was highly esteemed by King Saint Louis of France, as well as his brothers in religion who elected him prior in 1230 and abbot in 1235.

Even as abbot he lived in the midst of his brethren as the servant of every one, and surpassed all others in his love of poverty, silence, and holy prayer. Theobald’s shrine at Vaux-de- Cernay is visited by many people on Whitsundays (Pentecost). His solemn feast is kept there July 8 and in some places on July 9, which is probably the day on which his relics were first translated (Benedictines, Husenbeth, Walsh).

In art, Saint Theobald is a knight bearing the arms of Thann. He may, at times, wear armor under his Cistercian habit with his miter at his feet (Roeder). He is venerated in Thann (Alsace) and Hemel Hempstead (Roeder).

More information is available at: http://fr.wikipedia.org/wiki/Thibaut_de_Marly