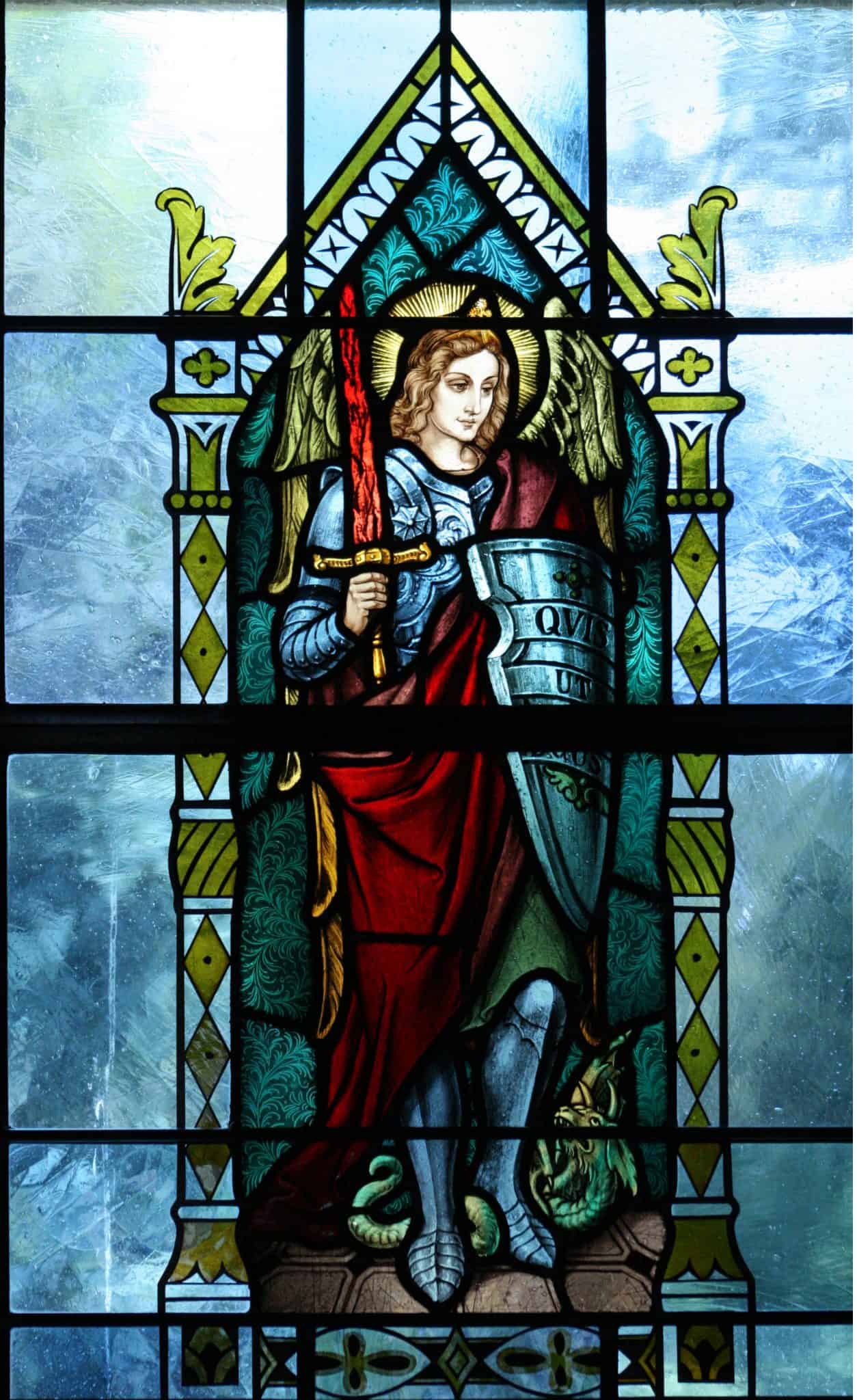 St. Michael (his name in Hebrew means “Who is like God?”) is one of the archangels and a powerful protector of those who serve Our Lord Jesus Christ. St. Michael is also a patron of those who work in dangerous situations, such as police, paramedics, and soldiers.

Regarding angels, the Catechism of the Catholic Church tells us in paragraph 334, “[T]he whole life of the Church benefits from the mysterious and powerful help of angels.”

The Catechism also tells us:

“Angels have been present since creation and throughout the history of salvation, announcing this salvation from afar or near and serving the accomplishment of the divine plan: they closed the earthly paradise; protected Lot; saved Hagar and her child; stayed Abraham’s hand; communicated the law by their ministry; led the People of God; announced births and callings; and assisted the prophets, just to cite a few examples. Finally, the angel Gabriel announced the birth of the Precursor and that of Jesus himself” (paragraph 332).

“From the Incarnation to the Ascension, the life of the Word incarnate is surrounded by the adoration and service of angels. When God ‘brings the firstborn into the world, he says: “Let all God’s angels worship him”’ (Heb. 1:6). Their song of praise at the birth of Christ has not ceased resounding in the Church’s praise: ‘Glory to God in the highest!’

“They protect Jesus in his infancy, serve him in the desert, strengthen him in his agony in the garden, when he could have been saved by them from the hands of his enemies as Israel had been. Again, it is the angels who ‘evangelize’ by proclaiming the Good News of Christ’s Incarnation and Resurrection. They will be present at Christ’s return, which they will announce, to serve at his judgment (cf. Acts 1:10-11; Mt 13:41; 24:31; Lk 12:8-9)” (paragraph 333).

“In her liturgy, the Church joins with the angels to adore the thrice-holy God. She invokes their assistance (in the funeral liturgy’s In Paradisum deducant te angeli… [‘May the angels lead you into Paradise…’]). Moreover, in the ‘Cherubic Hymn’ of the Byzantine Liturgy, she celebrates the memory of certain angels more particularly (St. Michael, St. Gabriel, St. Raphael, and the guardian angels)” (paragraph 335).

St. Michael is mentioned four times in the Bible:

This powerful archangel, St. Michael, fights valiantly and powerfully against the demons and protects the faithful from their power. How much we need his help today, as God’s people contend with the culture of death so prevalent in today’s world!

The 15th-century St. Lawrence Justinian once said, “Let all acknowledge St. Michael as their protector and be devoted to him, for he cannot despise those who pray to him… But he guards them through life, directs them on their way, and conducts them to their eternal home.”

In 1994, Pope St. John Paul II asked us to pray the St. Michael Prayer: “Although this prayer is no longer recited at the end of Mass, I ask everyone not to forget it and to recite it to obtain help in the battle against the forces of darkness and against the spirit of this world.”  In many parishes today, this powerful prayer is now prayed after Mass.

There is a beautiful Chaplet of St. Michael, which asks the powerful intercession of St. Michael and all the other heavenly angels. Also, you can find more prayers for protection and help here.

This prayer is a prayer against evil, so when we pray the St. Michael Prayer, we are praying for protection from evil in our lives and in our world.

Prayer to Saint Michael the Archangel

Saint Michael, the Archangel, defend us in battle; be our defense against the wickedness and snares of the devil. May God rebuke him, we humbly pray; and do thou, O Prince of the heavenly host, by the power of God, thrust into hell Satan and the other evil spirits who prowl about the world seeking the ruin of souls. Amen.