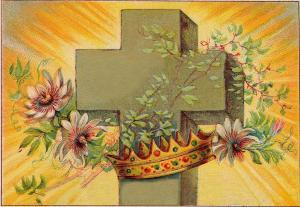 The Regina Caeli is one of four traditional antiphons prayed at the end of Night Prayer (Compline). The others are the Salve Regina (Ordinary Time), Ave Regina Caelorum (Lent), and Alma Redemptoris Mater (Advent/Christmas).

In 1964, Pope St. Paul VI began the custom of praying the Angelus or the Regina Caeli publicly in St. Peter’s Square and giving a short address along with it. This papal practice continues to this very day.

Maybe you’re asking about the title “Queen of Heaven” which we give to Our Lady.

“What then does it mean for Mary to be the Queen of Heaven? In the Old Testament monarchy the Queen of the Davidic Kingdom was the Queen Mother. The Kings, for reasons of state and human weakness, had many wives, none of whom fittingly could be called Queen. That honor was reserved for the mother of the King, whose authority far surpassed the many ‘queens’  married to the King. We see this is the role Bathsheba played with respect to King Solomon and the occasions when the Queen Mother acted as regent on behalf of juvenile successors to the throne.

“‘Behold, you will conceive in your womb and bear a son, and you shall name him Jesus. He will be great and will be called Son of the Most High, and the Lord God will give him the throne of David his father, and he will rule over the house of Jacob forever, and of his kingdom there will be no end’ (Luke 1:31-33).

“Aside from the prophetic types present in the Kingdom of Judah, there is also the text of Psalm 45:6-11, which when speaking of the Kingdom of God also speaks of its Queen….

This prayer replaces the Angelus during the Easter season.

Let us pray. O God, who gave joy to the world through the resurrection of Thy Son, our Lord Jesus Christ, grant, we beseech Thee, that through the intercession of the Virgin Mary, His Mother, we may obtain the joys of everlasting life. Through the same Christ our Lord. Amen.