Mottos, Then and Now 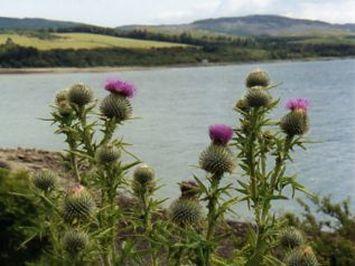 The Kerrs are Scotch-Irish, I am told by my genealogist-friend; that is to say, Scots who settled in Ireland in the 17th Century by the Crown to increase the Protestant population in predominantly Catholic Ireland. My ancestors lived there for three centuries before moving to Canada – a long enough period of time to earn the Irish part of our racial designation. I grew up simply believing I was Scottish, as both my father’s and my mother’s last names were Scottish clan names. This being the case, I spent a little bit of time looking into my cultural origins. One of the things I enjoyed was looking at the Scottish clan crests and mottos. I love biblical history, and so the idea of ‘clans’ makes me think of the original twelve tribes of Israel.

‘Tribe’ and ‘clan’ are designations that do not mean a whole lot to many North Americans today. Do we not first identify ourselves by our nationality? Flag-waving at papal events always perplexed me, though – after all, nationalism is a modern construct. Did the original apostles brag about being from Galilee or Caesarea or Idumea? Actually, Paul said such things were ridiculous. (cf. Ph 3:4-6) The only thing that really matters is that we belong to Christ. (1 Cor 3:23)

Nevertheless, even though it is not nearly as important as the fact that we belong to Christ, our cultural backgrounds are themselves something of a gift of God too. Something about the Scottish clan mottos struck me when I was glancing at them the other day. How very different must have been the mindset of the crafters of these mottos from us today!

My favorite motto is “touch not the catt bot a glove,” which is the motto of the Chattan, MacBain, Mackintosh and Macpherson clans. It’s a little hard to figure out at first. I interpret it to mean: “I am dangerous (like an angry cat), so if you want to mess with me, be careful or you might get scratched.” A similar bravado can be detected in the motto of the Maclaines of Lochbuieclan, “vincere vel mori,” Latin for “to conquer or die.” Mottos like these speak to the violence that was a part of life in that earlier time.

But these are not the most common type among the Scottish clans mottos. A great number are statements of faith and of virtue.

“Deo juvante invidiam superabo,” which means “I will overcome envy with God’s help”

“I hoip in God”; another, “Ghift dhe agus an righ,” Scottish Gaelic for “By the grace of God and king”

“Salus per Christum,” Salvation through Christ”

“Consilio et Animis,” which means “by wisdom and courage’

“Reviresco,” which means, “I grow strong again,” and is fittingly accompanied by a crest featuring a sprouting oak tree stump.

“In Defense of the Distressed”

“Periissem ni Per-iissem,” “I would have perished had I not persisted”

“Non inferior secutus,” “Not having followed mean pursuits,” and so on.

We believe in wishy-washy things, like tolerance and acceptance. Those are rather empty terms because people can mean different things by them – and that is the point: in order to obtain political consensus today, given that we are not united by actual values, politicians use empty phrases like these, phrases that can mean different things to different people. (By the way, this is referred to as ‘dog-whistle politics.’) Americans and their words, ‘liberty’ and ‘freedom’: these are powerful words. But what do they mean? Can a great people be formed through them, especially when they mean so many different things to so many people?

Take a look at the slogans politicians use for their election campaigns:

A logician would tell you that these phrases mean nothing in themselves. But this is what we have become, emotional, rather than rational beings, quite susceptible to manipulation. So very far away from my ‘savage’ Scottish forebears, who believed in things and stood for things, had conviction and honour, and were willing to live and die accordingly. The fact is, clans are small groups united by common interests. Modern nation states are not and cannot be, and so to be united we cannot really believe in anything.

Does this attitude influence you – that it is better to get along than to stand up for what is right? It is said of Socrates that sometimes he was so transfixed by an idea that he would just stand there thinking about it for hours. Truth mattered to him. Who among us is willing to let the whole world fall away rather than to be untrue?

If you had to choose, what motto would you want representing yourself and your family?

I might choose something like, “Nisi hunc crucifixum,” (“if not Him crucified”) which is a reduction of 1 Corinthians 2:2, “For I resolved to know nothing while I was with you except Jesus Christ and Him crucified.” It makes me think of the powerful words of Dostoevsky who once wrote, “If someone proved to me that Christ is outside the truth, and that in reality the truth were outside of Christ, then I should prefer to remain with Christ rather than with the truth.” Or another phrase of St. Paul, “For to me, to live is Christ and to die is gain.” (Phil 1:21)

But what kind of people can be arranged around nisi hunc crucifixum? One radically unlike the one in which I now find myself, for sure.