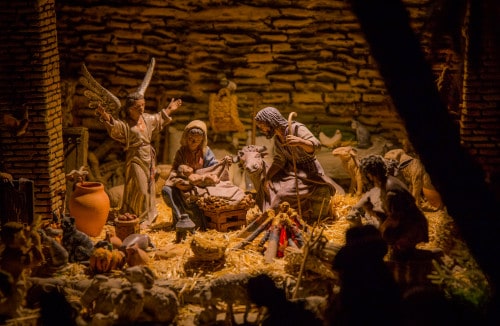 “The first part of Advent is a period of intense training in preparation for our Lord’s Second Coming.  On December 17th, the season of Advent changes its focus to the First Coming….

“The second preface of Advent is used throughout the second part of Advent from December 17th until December 24th.  In preparing to celebrate the birth of Him who has already come in the flesh, we continually recall in the preface that His coming in the flesh was proclaimed by all the prophets (Advent Preface II).

“The Scriptural themes will often coincide.  For example, the first reading from the Fourth Sunday of Advent calls upon the prophet Isaiah to provide a summary of all the Old Testament prophecies about the longed-for Messiah:  ‘The Lord himself will give you this sign: the virgin shall conceive, and bear a son, and shall name him Emmanuel’ (Is 7:14). Indeed, the child to be born is the Christ-child, God-with-us, Emmanuel.

“This celebration of the One who was proclaimed by the prophets, carried in the womb of His virgin mother, and made known by John the Baptist is the celebration of an event that changed human history (see Advent Preface II).

“God became man so that man might become like God.  ‘In the God who made himself man for us…we discover that we are precious and unique in the eyes of the Creator’ (Benedict XVI).  We discover that God our Father will never abandon us because His Son has become one of us.

“The second part of Advent prepares us to accept the transformative power of that first Christmas.  ‘To those who open their heart to this “baby wrapped in swaddling clothes” and lying “in a manger” (Lk. 2:12), He offers the possibility of seeing with new eyes the realities of every day’ (Benedict XVI).

“Our celebration of Christmas is not a yearly birthday party for Jesus; it is the celebration of Him who once came in the flesh but who continuously comes.  At Christmas we celebrate the beginning of Christ’s abiding presence in our lives even though His divinity came veiled in the flesh. Christ’s abiding presence becomes concrete for us in the Blessed Sacrament where His divinity is veiled under the appearance of bread and wine” (Br. John Chrysostom, O.P.).

Beginning December 17 and continuing through December 23, the special O Antiphons are prayed during Evening Prayer (the Liturgy of the Hours) before and after the Magnificat canticle. The O Antiphons use titles of the Messiah and verses from the Old Testament to express our longing for His coming. These inspiring antiphons have been prayed since at least the 8th century.

One Advent custom that you can share with your children is the making of “O Antiphon Houses,” with each section having a wood block with a symbol for each O Antiphon drawn on it.

The O Antiphons of Advent

O Wisdom, O holy Word of God, you govern all creation with your strong yet tender care. Come and show your people the way to salvation.

O sacred Lord of ancient Israel, who showed yourself to Moses in the burning bush, who gave him the holy law on Sinai mountain: Come, stretch out your mighty hand to set us free.

O Flower of Jesse’s stem, you have been raised up as a sign for all peoples; kings stand silent in your presence; the nations bow down in worship before you. Come, let nothing keep you from coming to our aid.

O Key of David, O royal Power of Israel controlling at your will the gate of heaven: Come, break down the prison walls of death for those who dwell in darkness and the shadow of death; and lead your captive people into freedom.

O Radiant Dawn, splendor of eternal light, sun of justice: Come, shine on those who dwell in darkness and the shadow of death.

O King of all the nations, the only joy of every human heart; O Keystone of the mighty arch of man, come, and save the creature you fashioned from the dust.

O Emmanuel, king and lawgiver, desire of the nations, Savior of all people, come and set us free, Lord our God.